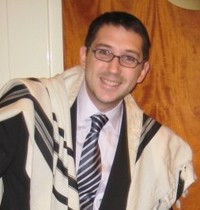 Early on in my own religious development, I gave a lot of thought to the idea of the ideal religious life.  As we see in the vision of Jacob’s Ladder at the beginning of Parashat VaYeitzi, is it a life devoted solely to Heaven, or is there a way to bridge Heaven and Earth?  There is no doubt that in contemplating Avodat Hashem, how best to serve God, the Chareidi “Torah only” approach has great allure.  To spend all day studying God’s word, through Torah learning, connecting to God, through Tefillah, and communing with God on Shabbat and Holidays, through a sweet mix of Torah, Tefillah and Zemirot can be intoxicating.   This lifestyle had great appeal to me at an important crossroads in my life.  But as I continued to contemplate my path forward, I thought a lot about my past as well.  I come from generations and generations of Chassidic Rabbis.  My grandfather sat at his father’s Tisch, as the son of the Rebbe, in Wengrow.  Yet, through the hand of God, which saved my grandfather, sending him to Scotland, then England and, finally, settling in Chicago – we were no longer Chassidic – we were Modern and Orthodox and that is how I was raised.  In some cosmic way, I felt (and continue to feel) that it was God’s will that I was raised in the way that I was here and I wasn’t meant to transport myself back to the way it was in Europe.  Don’t get me wrong, I still consider myself a Chassid but I guess a Modern Orthodox-Religious Zionist version of one.  Armed with this recognition and with the guidance of certain very special Rabbis and teachers of mine, as well as the counsel of a very wise woman (who I went on to marry), I saw being Modern Orthodox as a privilege not a problem.
This is why, for me, the ideal path of Avodat Hashem – in serving God – is to carve out our own centrist path that combines the Torah life with the Total life; taking the best that both worlds have to offer and then offering that up to Hashem just as the angels ascended up to God and descended towards earth by way of the “sacred sulam,” Jacob’s holy ladder.  Does the eternal Torah take primacy over the ephemeral things of this world?! Of course, but the two don’t have to be in conflict.  We should rarely have to choose between one over the other – if we set our priorities correctly and articulate and embody them from the outset.
If I had to put it into one word or phrase, I would say that our charge is to be Nesi’im, but not just provincial or tribal leaders.  I mean Nesi’im in the way that Ephron the Hittite (in Parashat Chayei Sarah) refers to Avraham.  When Ephron encounters Avraham as he seeks to purchases our first Chelek in Eretz Yisrael, the Maarat HaMachpela in Chevron – Ephron calls him a “Nassi Elokim” – the prince of God.  He refers to him as a sort of ambassador of God to the world.  And that is exactly what I think we ought to be: “Nesi’eih Elokim” – Ambassadors of Traditional – Religious Zionist – Judaism to the world.

As Modern Orthodox Jews, who are passionate about the Am Yisrael and Medinat Yisrael, we are uniquely positioned to be conduits and connectors to so many groups of people, because of what we value, where we work and what we do.  This unique ambassadorial role applies in 4 spheres, as I see it:

1) You can be a Nassi Elokim to your fellow Jew – to the non-observant, unaffiliated or Reform, Conservative, or Reconstructionist Jew – be it a neighbor, friend, classmate, dorm-mate, professor, co-worker or man-on-the-street.  In the polarized world we live in, we ought to reach out in a collaborative and cooperative spirit to work with and respect Jews, irrespective of how they believe or practice differently that we do.  This is why I am so proud of our collaborations and communal activities with our neighboring Reform Rabbis and Temples.  May it only continue and may our Achdut message continue to spread.
2) You can be a Nasi Elokim to the non-Jewish world – to anyone you meet in any situation: in school, in the workplace, in the street, at a movie, a ballgame, a play or a concert – and anywhere that life takes you across the globe.  For in our day and age, sadly the world’s image of an Orthodox Jew is one that is on the cover of newspapers as those who manipulate, steal, bribe, extort or cheat.  That’s why I say, wear a Yarmulke out on the street – in the city or in the neighborhood – so you can provide a counterpoint to this negative image of the Orthodox Jew.  By identifying as Orthodox, albeit Modern Orthodox, you have the opportunity to be a model of the Jew as a moral and ethical citizen of the world.
3) You can be a Nasi Elokim in the pro-Israel community, both here and in Israel – always standing with the People of Israel and standing up for the State of Israel.  Sadly, many Jews in the Orthodox and non-Orthodox community, don’t share the pride, joy and shared destiny that we feel with Israel and its People.  Not every community says Hallel and celebrates Yom Ha’atzmaut and Yom Yerushalayim the way that we do.  This religious Zionist spirit is also something that we have that should be modeled for others.
4) Finally, you can also be a Nasi Elokim to the religious world – Jewish, Christian and Muslim – in promoting a traditional approach to Torah and Scripture that also has a heart.  One that places humanity over theology and that gives dignity, love and credence to all people, regardless of: race, gender, creed or sexual orientation.  This “Halacha with a Heart” is sorely needed in the Orthodox community and in so many other faith communities around the globe.
This is the special role that Modern Orthodox – Religious Zionist Jews like us can and will play in shaping the Jewish future.  But, in order to do so, there has to be Orthodox as much there is Modern – the out-and-about lifestyle of the Nasi has to be coupled with a real dedication to Elokim.  There must be a commitment to leading a life governed by our core Halachot, Mitzvot and practices – and if not a total commitment, at least, a total aspiration towards committing ourselves to do our very best.
Shabbat has to be observed as truly a holy day – we must have the courage and faith to turn off our phones/computers and really immerse ourselves in the day the way it ought to be observed, free from electronic or digital interruptions.  Kashrut needs to be something more than just something I’ll do when I go home.  Mikvah should be more than just a one-shot deal before I get married. Tefillin can’t just sit on a shelf collecting dust – waiting for a special occasion that requires me to bring them to Shul and put them on, they should be worn on a regular basis.  Putting your Tefillin on at your dining room table or in your study will make all the difference in the world – years from now – when your son/daughter are off on their own and ready to start their own Jewish homes.  Passionate Tefillah should be a part of our lives, both at home and in Shul on Shabbat and Holidays.  Our souls should be nourished and sustained with Torah study, Jewish education, and communal prayer – just as much as our minds and senses seek to be nourished with technology, culture and fine wines, craft beers, gourmet foods, single-malt scotches and bourbons.  And this commitment to the soul over the senses is paramount to sustaining the Orthodox aspects of our Jewish lives.  For Judaism without a soul is like a body without a soul…
This is not an easy path by any means, but I can assure you, it is the most meaningful and fulfilling path that you can choose.  And I believe that you, our graduates, and all of us, can do it.
So the next time someone asks you what it means to be Modern Orthodox – Religious Zionist Jews, just tell them what it really means.  We are the goodwill Ambassadors of Judaism to the world.