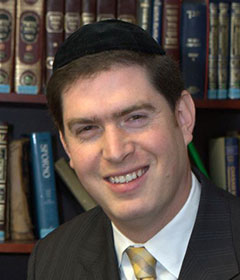 Rabbi Axelrod is the rabbi of Young Israel of Woodmere in Woodmere, NY.

In Parshas Vayechi, we read how Yakov son’s intern him in Ma’aras Hamachpeila. The Torah does not provide many details of this final act of chesed shel emes. The Talmud (Sota 13a) offers a fuller description. As the brothers neared the cave, Eisav came upon them and held up the procession, laying claim to the one remaining plot. A debate ensues between the brothers and Eisav whether the plot was included on the original sale of the Bechora. Eisav challenges them to prove it. Lacking the proof, Naftali, being swift as a deer, is called upon to retrieve the document from Egypt. At that point, the Talmud records the following:

Chushim the son of Dan was there, Veyakiran Lei Udnei – he was hard of hearing (Rashi). He asked what was going on and was told that Eisav was holding up the burial as they waited for Naftali to return from Egypt. Chushim said to them, “Until Naftali returns my father’s father should lie in a state of denigration?” Enraged, Chushim takes a staff and cuts off Eisav’s head. Most commentaries understand that Chushim’s actions were the result of his handicap. Yakiran Lei Udnei is interpreted as a hearing deficiency. Because Chushim did not hear, his lack of comprehension caused him to be overcome with anger and in the heat of the moment, he struck out at Eisav. While this is certainly the traditional understanding of the Gemora, one can suggest a different perspective of Chushim.

Only one other Medrash mentions Chushim. The Medrash on Parshas Vayigash describes how in response to Binyamin’s captivity, Yehuda began to scream and roar like a lion.  Ad Sheshama Chushim ben Dan; until it was heard by Chushim. Upon hearing Yehuda’s cry, Chushim jumps to Mitzrayim and joins Yehuda in his cry. While many understand this medrash to imply that Yehuda’s cry was so loud that even Chushim, though hard of hearing, was able to hear it. Perhaps the medrash keys us in to a more special trait of Chushim. One that will enhance our understanding of the events surrounding Yakov’s burial, and provide us with a paradigm example of Jewish responsiveness.

Chushim derives from the shoresh (root) of chush, to feel, to sense. Chushim possesses a sense which others often lack. He has the innate ability to perceive the meaning, to discern the significance of people and events. He is guided by an awareness of people’s pain and suffering, and has the intuition to grasp the implications of events. K’shmo ken hu, Chushim lives up to his name. Chushim is a man of sense. This is the meaning behind the medrash with Yehuda. After Binyamin was taken and Yehuda responds with a primal cry, only one person hears it. Only one individual responds. Whereas all the rest of Yakov’s family heard his cry, Chushim alone heeds the call and immediately responds. In a moment’s notice, Yehuda’s cry impacts and motivates him to go down to Egypt and join Yehuda in his suffering and pain. if a fellow Jew is in trouble and is calling out in anguish, then Chushim feels it. And his feeling is translated into action. His ability to sense the needs of others obligates him to do what he can to alleviate and share the burden of others. He is truly Chushim. Both the medrash and the gemarah see Chushim in this light. When the Talmud identifies him as Yakiran Lei Udnei, it is clueing us in to the special middah, the unique quality of Chushim. The word yakiran is derived from root of Yud, Kuf, Riesh: yakar. It often means heavy as Rashi indicates, but yakar also means precious. The Talmud in saying Yakiran Lei Udnei is telling us that Chushim possessed the unique quality of having a precious ear. Chushim’s level of intuition and perception was the essence of his being. He is a paradigm example of a middah that is often so lacking in people.

With this understanding of Chushim we can now reexamine the events surrounding Yakov’s burial. In burying Yakov, Eisav arrived to challenge not only the burial, but more importantly to contest his rights to the Land. The brothers made a mistake. They got caught up in discussing something that was a given. They started to make cheshbonot, calculations of legal rights as evidenced by documents. They were frozen, and in their passive reluctance to confront Eisav, they denigrated Yakov. One man saw it. One man understood what was at stake. One man perceived that Eisav’s claim was not just about a plot but rather about hasadeh asher kanah Avraham. Abraham bought the entire field, the larger Land of Israel. Chushim understood that Eisav’s claim of the plot was actually an attempt to extend his claim to the entire land. Eisav was challenging the Jewish right to Eretz Yisrael. While the brothers are frozen, waiting for the correct documents to arrive from Egypt, Chushim senses and acts. Chushim perceives that Eisav’s threatens the future of the Jewish people in the Land of Israel. Chushim is identified by the Talmud as Yakiran Lei Udnei, the one with the precious ear. He alone possesses the ability to grasp the implications of events, and responds. His act in killing Eisav not only allows for the funeral procession to proceed but more importantly reestablishes the undisputed right of the Jews to the Land of Israel.

For us today, Chushim is the prime example of how the Jewish people should respond to events in Eretz Yisrael. Like Chushim who heard the cry of Yehuda, we too have to hear the cries of our brothers and sisters in Israel. But hearing the cries is not enough. Just as Chushim joined with Yehuda, we too must demonstrate our commitment to Medinat Yisrael. The claims of Eisav are still being articulated in the halls of the UN. Asa Eisav Ka Me’akev, the world is coming with its resolutions and wants to stop our claim to a secure Israel. Chushim teaches us to remain steadfast. To understand that we alone are responsible for our welfare. Our times require us all to be like Chushim. In so doing, we will not only be following a man of feeling who sensed the needs of others and perceived the threats to Klal Yisrael’s existence, but we will be helping to bring about a time when there will be no more suffering and pain, for the Jewish people will dwell safely and securely in Eretz Yisrael.