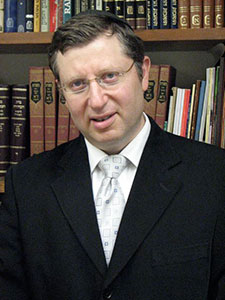 Rabbi Schwartz is the rabbi of Ohab Zedek in New York, NY.

Rabbi Yehuda Ha Nassi’s son Shimon was preparing for the standard 12 year yeshiva program away  from home and as he was leaving he was told that a bride had already been chosen for him.  He  broke protocol by asking to meet his future wife before his departure.  His father allowed it and the  young couple had a short meeting.  Shimon was so enamored with the young girl that he asked to  interrupt his 12 years of learning by marrying after 6 years.  Rebbe allowed it and after a second  thought, Shimon begged his father if he could marry the girl immediately and then, while married,  learn the requisite 12 years.  Rebbe’s response was to compare his son’s behavior to God and that  the behavior is manifest in the Torah portion of Terumah.

Moshe, in the Shirat Hayam predicted that God would firmly implant his people in the Mountain of  His dwelling and that then His sanctuary would be established.  Yet, God couldn’t wait that long.  The  time of the unification of God and His people, so that He would dwell in their midst, was taking too  long. God broke protocol, as it were, by commanding us to build His sanctuary before crossing over  into Israel.
There is a dispute at the end of Masechet Sanhedrin over whether God or Israel must make the first  step to our salvation.  The Gemara seems to conclude with Rabbi Yehoshua that God will make the  first move, yet Rambam in Hilchot Teshuva decides that “אין ישראל נגאלין אלא בתשובה.” Our redemption will only come on the heels of our repentance.

Rav Yissachar Teichtel in his groundbreaking book, אם הבנים שמחה posits that the oaths placed upon  us regarding the redemption have not been violated by any mean.  The oath to refrain from  establishing a political movement in Israel without God’s input is not an issue, he argues.  The events  of the last 100 years are clarion calls to act in the framework of Rebbe’s son Shimon.  And the oath  not to rebel against  the will of the nations in our return to Israel, has also been undone by such acts  as the 1917 Balfour Declaration, and the league of Nations Recognition of 1922 to say nothing of the  UN Partition Plan of 1947.
The Talmud says that we lost an opportunity for the Messaianic arrival in the Days of King Hezikiah  because he did not adequately show his appreciation for the salvation of Jerusalem and Israel.  Let us  not make the same mistake.  Let us take advantage of the incredible good will that millions of  Americans have toward Israel.  Let us join the RZA in presenting Israel’s best foot forward by  continuing to seek its peace and prosperity.  It all starts, like Shimon, son of Rebbe with our initiative  and one foot at a time.