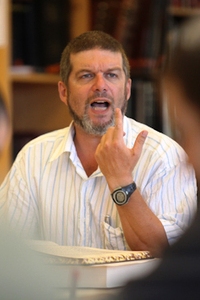 The Mishna in Perek Dalad of Psachim states about Chizkiyahu making Pesach in Iyar “lo hodu lo.” Why do the Sages apprehend Chizkiyahu for making a Korbon Pesach? Let us look at the details and the context of the event.

Chizkiyahu’s father was Achaz, a king who closed the doors of the Bet haMikdash, built alters for idol worship in the architectural style of the king of Assyria, etc. In contrast, Chizkiyahu was considered by Chazal to have been the greatest king of all time. The Midrash states that G-d wanted to make Chizkiyahu Mashiach. What had he done to deserve this praise? He led a massive teshuva movement. He had the Jewish people get rid of their idols, told the Cohanim and Leviim to purify themselves, had the Jewish people learn Torah, did a mass repairs on the Bet HaMikdash, etc. It so happened that the repairs on the Bet HaMikdash, together with the purification process and the re-dedication took until the 16th of Iyar. Chizkiyahu had various atonement offerings brought and then ruled that they should bring the Korbon Pesach as well. In this context, it seems that Chizkiyahu’s intentions were proper — the Korbon Pesach would be in the context of atoning for the Jewish people’s sins and starting over.

However, there were two problems: The first was that he called to all the Jewish people to come but not everyone was willing. Divrei HaYamim describes how the tribes of Efraim and Menashe mock Chizkiyahu for ordering them to come bring the Korban Pesach. Why so? It is possible that they were not on board with the teshuva movement to begin with. However, it is also possible that they were criticizing Chizkiyahu for being a “chadshan,” for creating new laws out of nowhere. The Korbon Pesach is not normally brought on the 16th of Iyar. Yet, it is said that Chizkiyahu had created a leap month, so it technically still could have been Pesach, in Nissan. And we know that one may bring a Korbon Pesach all the days of Pesach if one had not had the chance to do so prior.

Why, then, did the Chachamim disapprove of this Pesach? The Rambam explains one reason for the Chachamim’s disapproval of Chizkiyahu’s Pesach. Normally, when one creates a leap month, one must declare it before the 30th of Adar, because that day is already considered to be Rosh Chodesh Nissan. Chizkiyahu, however, had waited until the 30th of Adar to create a leap month. Because he did not follow the procedures, his intercalation of the year did not work, and the month that he wished to bring the Korbon Pesach remained Iyar. That was problem number two.

However, there seems to be another facet to the Sages’ disapproval of Chizkiyahu’s Pesach. The Yalkut Shemoni writes that Pesach needs to be had “at the time that Matzah and Maror are placed in front of you.” That is, there is a significance to having the Korbon Pesach in its proper context, with Matzah and Maror. Why had Chizkiyahu wanted to make this Korbon Pesach in the first place, seemingly disjointed and separate from its context – the correct date and with Matzah and Maror? Chizkiyahu had looked to Moshe’s making a brit after the sin of the Golden Calf and Yehoshua’s making a brit after circumcising the Jewish people in Gilgal. He realized that after having distanced themselves so far from G-d, the Jewish people needed to renew their covenant with Him. So what was the problem? It was not at the time that Matzah and Maror were out on the table. Matzah and Maror here symbolize history – whereas we know the Korbon Pesach we bring (Pesach d’dorot) is different from the one they had in Egypt (Pesach d’Mitzrayim) – the matzah and the maror remained the same. They serve to anchor the Korbon Pesach to its history. And that was the problem with Chizkiyahu’s Pesach. His wish to renew the Jewish people’s commitment to G-d with a renewed covenant was admirable. But its disconnect from the historical context was unacceptable. Chidush and history go hand-in-hand – the Sages could not approve of Chizkiyahu’s chidush, which was bereft of its roots, its connection to Pesach Mitzrayim.

Rav Ehud Zand is Rosh Yeshiva of Yeshivat Kiryat Shemonah, located in the northern Israeli town of Kiryat Shemona and offers a comprehensive five-year education program with a strong focus on Talmud, Tanach and Jewish philosophy. It also serves as a community center, with a variety of programs and services, ranging from providing assistance to the poor, elderly, infirm, and those with special needs, to offering educational services to the outlying communities.  They also function as a food bank in times of both war and peace and serve as the point people who distribute food to families in bomb shelters.  Most importantly, the Yeshiva serves as the first line of defense on the northern border with Lebanon.