Parshat Beshalach: “Speak to the Children of Israel and tell them to journey forth!” by Rav Gur Golan 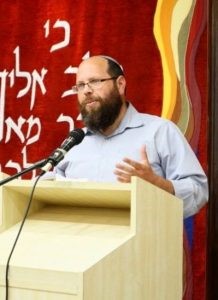 This week the Jewish People begin their journey throughout the desert, a journey that will take them all the way to the Promised Land. The generation of the “midbar”, as its name suggests, was a generation which lived outside of nature. The desert is a place where people cannot naturally live, and where everyday life is miraculous. So too the generation of the midbar was filled with miracles, and was a generation which was not bound by the natural order we live in.

On the day to day level, the generation of the midbar had the pillar of fire and the clouds of glory to guide them. Manna fell from the heavens, the sea split before them and their battles were dependent on the hands of Moses. More than all of that, the generation of the midbar was able to live outside the normal spiritual order. In the normal spiritual order there is reward and punishment, where how much good God bestows upon you depends on your merit. Not so was the generation of the midbar. The prophet Yechezkel (16;6) tells us, “Then I passed you and I saw that you were stumbling in your blood, and I said to you, “In your blood you shall live”, I said to you, “In your blood you shall live.” According to the Sages our people were standing at the 49th level of impurity in Egypt, and were not deserving of redemption. Nevertheless, God redeemed us despite our inequities.

And yet despite, or perhaps in spite, all the miracles which occurred in that generation, we see that there is a clear need for Israel to act before God can bestow any miracle on them. The order of redemption requires “kol dodi dofek” “the voice of my beloved is knocking”. Thus, the Sages teach us in Shir HaShirim Rabbah (Shir HaShirim 5;2):“Open for me”, Rabbi Yasa says, “The Holy One Blessed Be He tells Israel. My children open for me one opening of repentance as small as the point of a needle, and I will open for you openings in which carriages can enter through.”

In the depths of Egypt too God demands that we first open for him the doorway, even if it is only a crack, so that He can redeem us. Thus, Israel is told to take a sheep, one of the Egyptian gods, slaughter it and spread its blood on the doorpost. It is a sign of our faith in Hashem, but it is also part of the divine command that we must act if we wish to see the redemption.

This is even clearer at the Splitting of the Sea. God bestows upon us a miracle which is greater than anything he did during the plagues, and again we find God demanding that we take the first step. “And Hashem said to Moshe, “Why do cry out to me?! Speak to the Children of Israel and tell them to journey forth!”

The Gemara in Sotah 37a stresses this even further, when it relates how the Jewish People refused to go into the sea. Each person said, “I am not going down first into the sea!”. The Gemara relates that Nachshon ben Aminadav acted, and went first into the sea. It was only after that, that God told Moses raise his staff and stretch his arm in order to split the sea. The Gemara then states that it was because of Nachshon’s bravery that the tribe of Judah merited being the rulers of Israel.

Furthermore, this Gemara teaches us that Nachshon was the only one to jump into the sea. The masses did not wish to go into the sea as they were skeptic, afraid and lacked courage and faith in God. Only one person, out of an entire nation, decided to jump and act. An action by one man might seem miniscule compared to an entire nation which is passive, but it was enough to bestow upon Israel the miracle of the Splitting of the Sea. “Open for me”, God tells the Jewish People, even the smallest action can be enough to bestow upon us the greatest of miracles.

Additionally, the Gemara in Sotah tells us that Nachshon jumped into the sea before the explicit command given by God, “Hashem said to Moshe, “Why do cry out to me?! Speak to the Children of Israel and tell them to journey forth!” In that moment Nachshon was in grave danger, because if the nation wouldn’t follow then he would have drowned. Indeed the Gemara relates that God told Moses, “My beloved ones are drowning in the sea, and you are praying?! Speak to the Children of Israel and journey forth!”

In our generation as well we must try to become like Nachshon, in Torah learning, in settling the Land of Israel and in everything. Just as it was for the generation of the midbar, so too it will be for our own our actions will, God Willing, merit us to see the full redemption speedily in our days.

Rabbi Gur Galon is a Rosh Yeshiva in Yeshivat HaHesder Har Brachah which is located in Yehudah and Shomron.