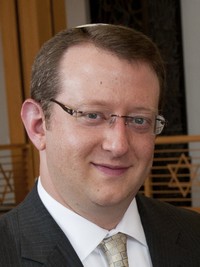 The “broad stripes and bright stars” of the American flag may inspire genuine appreciation for the “land of the free and the home of the brave,” but it is the high-flying eagle, with olive branches in one talon and an arsenal of arrows in the other, resolute in its commitment to protect its maxim ‘E pluribus, unum’ (‘from many… one’) that truly captures the American spirit.   Similarly, while the symbol of Jewish identity (‘Magen David’) centered on a backdrop of “Judah’s Colors” (see the 1864 poem by the Austrian Jew Ludwig von Frankl) never fails to awaken the innate yearning (‘Hatikva’) of the Jewish soul for its ancestral homeland, it is the seal of the State of Israel that genuinely embodies its noble aspirations.  It is, therefore, somewhat surprising- especially for those inclined to view the modern State of Israel as a thoroughly secular enterprise- to discover that its seal (Semel Medinat Yisrael) is taken directly from from the 4th chapter of Zecharya, which we read as this week’s Haftarah.

The third chapter of Zecharya closes with a brief, but wondrous, glimpse of the messianic era when tikre’u ish lerei’eihu el tachat gefen ve’el tachat te’eina (every man shall invite his fellow to join him under his grape vine and fig tree).  But suddenly, Zecharya is “jolted awake, like a person from a deep slumber.” While the messianic vision will continue to animate and inspire, Zecharya is ‘shaken’ from his utopian dream, which is replaced by a more pragmatic and relevant image, one that challenges Bnei Yisrael to chart a course that will, ultimately, turn that dream into reality.

What ‘jarring image’ replaces Zecharya’s fleeting glimpse of the messianic era?  A seven-branched golden menorah with two hearty olive branches on either side, each one providing the fuel needed to keep the menorah burning.  The significance of this image, adopted as the seal of the State of Israel in 1949, is then explained to Zecharya.  The menorah represents God’s mastery and His spirit and the two olive branches represent the mission of shenei benei hayitzhar (the two who are ‘anointed in oil’), as the 12th cent. commentator RaDaK explains:

The implications of this vision for the Shivat Tziyon of the 2nd Temple period, and for the return to the Land of Israel in our time, are numerous:

This image of political and religious leadership as separate but equal partners in providing the nourishing fuel of Divine majesty is a challenging concept to grasp.  Even after Zecharya has made it clear that he does not initially grasp the significance of the his vision, twice (4:5 & 4:13) the Mal’akh Hashem asks him: “Do you not understand the meaning of these symbols?”  To a Mal’akh, the significance of this nuanced vision is crystal clear; to we humans- even to those possessing the wisdom and insight of Zecharya Hanavi– grasping both the significance of this prophetic vision and the importance of its nuanced message remains as challenging today as in Biblical times.

Unfortunately, both the historical record and our own Mesorah assert, all too clearly, our failure to implement Zecharya’s prophecy during the 2nd Temple period.  In the wake of the euphoric rekindling of the Menorah in the Beit Hamikdash, even the heroic Chashmona’im were blinded by its light and failed to appreciate the need for separate institutions of Melekh & Kohein, working in partnership.  The power plays, sectarianism and in-fighting over Jewish leadership that characterized the two centuries that followed led Chazal to conclude (Yoma 9b) that the 2nd Temple was destroyed because of Sinat Chinam (baseless hatred amongst Jews).

Some 2500 years after Zecharya Hanavi, we are so privileged to once again be living in a time of Shivat Tziyon and the establishment of a Jewish State whose very seal is taken directly from the prophecy presented in this week’s Haftarah.  The State of Israel- represented by Zecharaya’s Menorah that adorns both its seal and Knesset- does not, de facto, herald the arrival of the messianic era; rather, it presents an opportunity for God’s majesty to shine forth from a global stage, thereby illuminating the path towards that end.  Amazingly, then, the Semel Medinat Yisrael– the very symbols chosen to capture the core principles and ideals of the modern State of Israel- gives clear expression to the noble mission of Religious Zionism: to cultivate and strengthen the independent institutions of Melekh (political leadership) and Kohein (religious leadership) working together in partnership to fuel the Menorat Hashem.