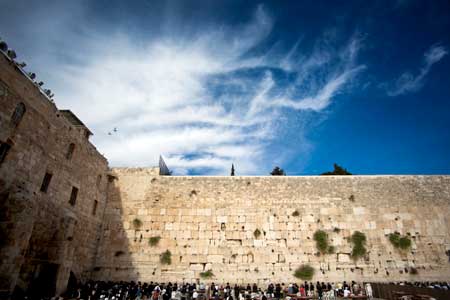 Greetings from Jerusalem! Here there is euphoria in the air. Not only because President Trump is here and it’s the first time a sitting President of the United States paid a visit to the Kotel. But truly, the city is humming because tomorrow, Wednesday June 24th (28 Iyar 5777) Jews around the world will be celebrating the 50th anniversary of the reunification of Jerusalem.

On Sunday night tens of thousands of people were gathered outside the Old City walls – facing the Tower of David – to witness the historic opening ceremony of Yom Yerushalayim 50. Click here to see three minute video.

Prime Minister Netanyahu, President Ruby Rivlin and new US Ambassador David Friedman were all in attendance. The ceremony included an unprecedented sound & light show projected onto the Old City walls. But what was most remarkable about this show was that it told the story of the Jewish People. It reminded us that our history in this location dates back, not 50 years, but 3800 years. We saw images of Akeidat Yitzchak, Jacob’s ladder, King David, prophets and centuries of Jewish presence in Jerusalem.

On Monday morning I went to daven Shacharit at the Kotel. How meaningful it was for me to pray by the Wall where my great-grandfather prayed. To touch the stones that my great-grandfather touched. HaRav Yosef Shloush Z”L was one of the great rabbinic leaders of the Sefardic community in Jerusalem. (He was the Rosh Av Beit Din – head of the Jewish Court and Rosh Chevra Kadisha – head of the burial society – of the Moroccan community in Jerusalem.) He lived in the Old City and had a Synagogue in the Old City. But in 1948 – like the rest of the Jews of the Ir HaAtika – he and his family were exiled from their home and community. He had to open a new Synagogue in Nachlaot and find a new home nearby.

In the days ahead we look forward to more celebrations and opportunities to express our Hakarat HaTov for this incredible gift of a United Yerushalayim. It’s hard to believe that just 50 years ago, a barbed wire fence divided the city of Jerusalem and that sniper fire was part of life in Jerusalem.

2000 years ago the Jewish People were exiled en masse from our beloved city and homeland. Since that time, in every corner of the world, Jews recited, mournfully, the immortal words “Im Eshkachech Yerushalayim Tishkach Yemini.”  Rabbi Sacks said “In all of history, no People ever loved a city like the Jewish People loved Jerusalem. We are the People that never stopped dreaming.”

How fitting that this coming Shabbat we will read “Parshat HaDegalim.” In Parshat Bamidbar we highlight the encampments of the Jewish People when they traveled in the desert. The Jewish People traveled in a very specific, box formation. Three tribes on each side, each with their own flag and the Aron HaKodesh (holy ark) in the center. What a colorful illustration. Rashi tells us that this paralleled the way that the brothers surrounded their father’s coffin (as instructed by Yaakov before his death) when they accompanied him out of Egypt to be buried in the Me’arat HaMachpelah. Each brother was assigned a specific spot. Three on each side. The Kli Yakar informs us similarly that the travel formation in the desert also parallels what the Bnai Yisrael witnessed at Mt. Sinai. The Midrash tells us that the sky opened up and the Jewish People looked Heavenward. There they saw the angels up Above, with flags, surrounding the Kiseh HaKavod (Divine throne). Am Yisrael eagerly sought to mirror this practice.

If we could be imaginative, I would like to suggest that this idea could be extended to a fourth sketch or scheme as well. Look at a map of the world. Spread it out and notice the configuration of the continents. North and South America are to the West. Asia and Australia are to the East. Europe is in the North and Africa is in the South. Remarkably, the tiny State of Israel sits in the very center of the map. Furthermore, Jerusalem is situated in the center of Israel and Har HaBayit (Temple Mount) appears in the center of Jerusalem. How incredibly moving that much like the tribes surround the Ark of Hashem, the entire world encircles the State of Israel. Jews in every country pray toward Yerushalayim. Where ever we are, our minds are upon Jerusalem. We hold our Degalim; our Jewish pride, devotion and identity as we face Jerusalem. What a fabulous image.

Yerushalayim is our core. It is our center. It is our Neshama. It is the air we breathe. We have an unbreakable bond with Jerusalem; a bond that has lasted for thousands of years. Jerusalem is in the heart of every Jew.

Minister Naftali Bennett reminded us of this when he intimated that, growing up in America, his parents were not religious. But they always felt connected to Jerusalem. They were glued to the radio during those critical days, fifty years ago, when Jerusalem was under siege. And when they heard that Jerusalem was liberated they picked themselves up and moved to Israel.

On this Jubilee anniversary of the Six Day War, please be encouraged to not let this day go by idly. Why not attend an event in celebration of this historic milestone? (You can see a sample listing of Yom Yerushalayim programs around the country at www.rza.org.) At the very least, go to Shul and sing Hallel. Say it slowly and with a full-heart. Utter the words written by your great-grandfather King David as he sat in his royal palace three thousand years ago in Jerusalem. Thank G-d for the gift Am Yisrael has been given and pray that we should merit to see this blessing continue until the arrival of the Mashiach.